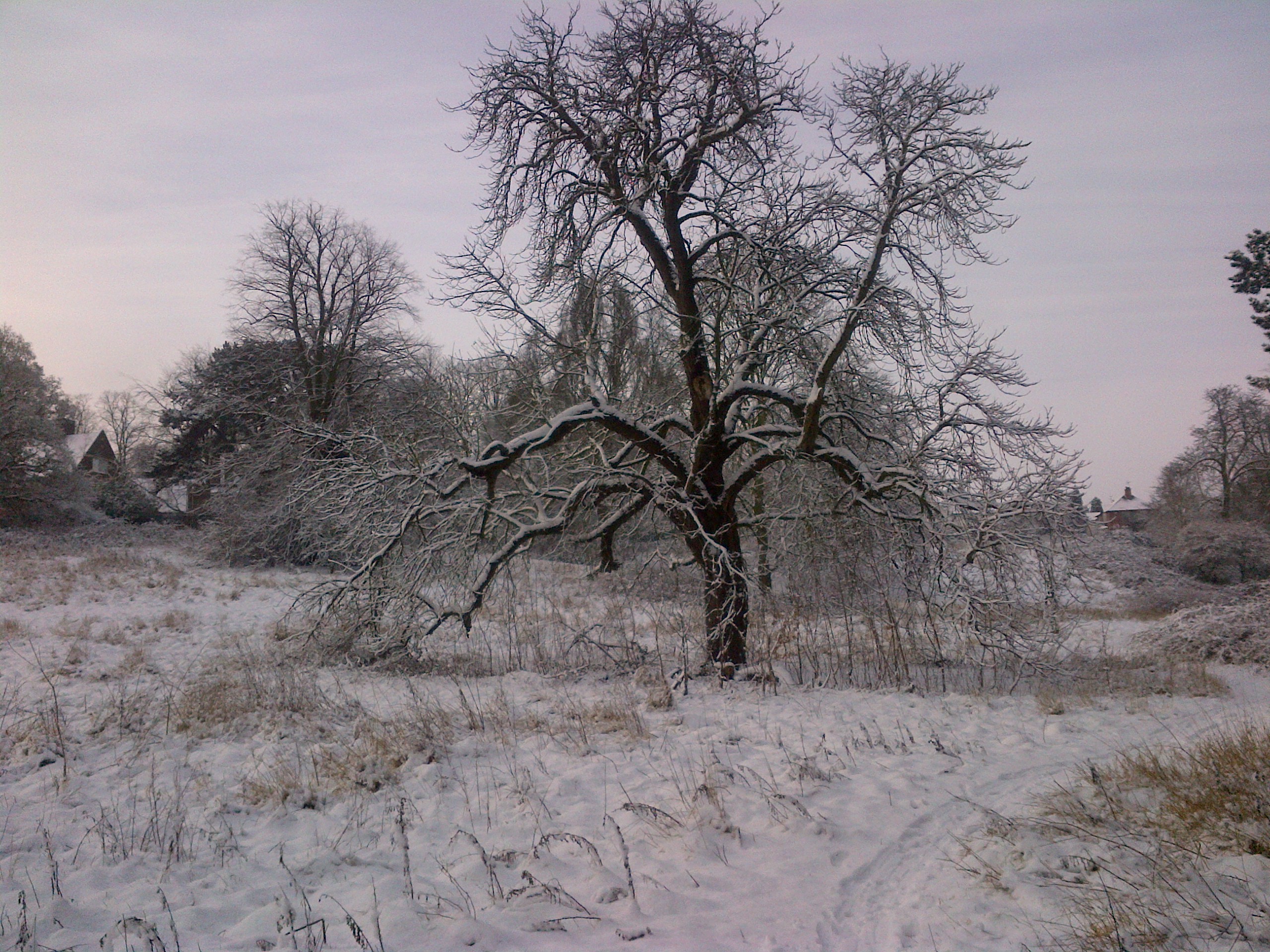 The first frost for winter 2015 has seen forecasters predicting more cold weather for the coming weeks. Conditions on the roads are likely deteriorate and a repeat of last years weather could bring some of the worst driving conditions seen across the Midlands.

Winter tyres use a tread rubber compound (high silica content) and tread pattern specifically designed to retain flexibility in low temperatures (below +7C) and give good braking/traction performance on snow/ice as well as on wet roads in cold conditions .

The sidewall of a winter tyre will be marked with a symbol showing a snowflake or snow-topped mountains.

Winter tyres are not really suited to all year round use though – summer tyres will give better performance when temperatures are higher and roads dry – so we reccommend two sets of tyres if you’re going to choose specialist tyres for winter.

Should you buy winter tyres?

Winter tyres make sense if you live in a remote area where winter conditions are likely to be worse for longer or you have essential journeys to make throughout the winter months.

Otherwise it may be harder to justify the cost, though this has to be a personal decision depending on the risk of bad weather, your confidence when driving and how much you have to drive when snow and ice are around.

Winter tyres must be fitted in sets of four. Fitting only one pair will affect the balance and stability of the car.

As an alternative you could consider buying ‘All Season Tyres’ which also have a high silica content for low temperature flexibility and a tread pattern somewhere between a normal summer tyre and an out-and-out winter tyre. Like all compromises they’re unlikely to be as good as the best specialist tyre but can be expected to work better on wintry roads than a summer tyre and you will avoid the hassle and cost of swapping wheels/tyres twice a year

If you fit winter or all-season tyres in place of your standard ‘summer’ tyres there should be no need to tell your insurer – even though the speed index might be lower.

The lower speed index is still likely to exceed all national speed limits by a considerable margin – with the exception of some German autobahns – and is not checked as part of the passenger car MOT test.

If you follow the standard European practice of keeping two sets of wheels, one with winter tyres and one with summer tyres, then you shouldn’t need to tell your insurer as long as the winter tyres are fitted to wheels of the correct specification for your vehicle.

According to the Association of British Insurers (ABI)

If anything winter tyres should reduce the accident risk and, by implication, drivers who fit them are likely to be more risk-conscious too.

The major motor insurers have all confirmed that they would not class fitting winter tyres as a material modification and it would not impact on the premium. The one condition would be that they would expect such tyres to be fitted by reputable garage/dealer, in accordance with the motor manufacturer’s specifications.

Some said that they would not require the policyholder to tell the insurer these tyres had been fitted, but the ABI’s advice is to play safe and tell your insurer anyway.

Whatever tyres you fit they must have enough tread  – at least 3mm is recommended for winter, and certainly no less than 2mm.

Check tyre pressures too but don’t be tempted to try reducing pressure when there’s snow and ice about – it doesn’t help with grip and can affect handling.

At Carizma we offer Free tyre condition checks including pressures and advice on tyre choice and also supply and fit all tyre types to the highest standards all at very competitive prices.

This convincing replica of the Ferrari 250GT Spyder California was commissioned and built for the 1986 Paramount Productions motion picture Ferris Bueller’s Day Off starring Matthew Broderick as the high-school slacker. When Ferris decides to skip school one day, his friends go with him; the father of one of them owns a Spyder California. You can guess the rest… 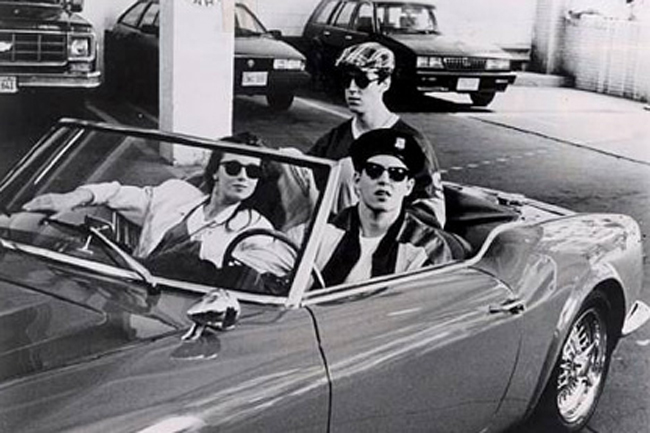 Only 100-or-so Spyder California’s were made between 1958 and 1963. Genuine examples are rare and worth a king’s ransom, so it is perhaps understandable why Paramount chose to use a replica a rather than the real thing. Sleekly styled by Pinin Farina, its classic lines combine elegance with aggression in equal measure. The Spyder California was directly descended from the ‘Tour de France’ competizione model and was powered by the same Colombo-designed 3.0-litre V12 engine producing anywhere between 240 and 280bhp. 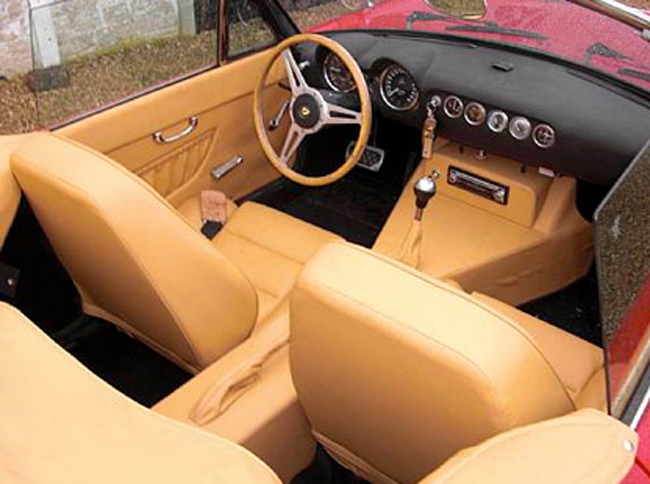 Delivered to us via enclosed transporter and rolled out carefully the GT oozed style and presence immediately, as if under the studio lamps from which the GT was once lit our workshop brightened and bristled with excitement for our latest project. 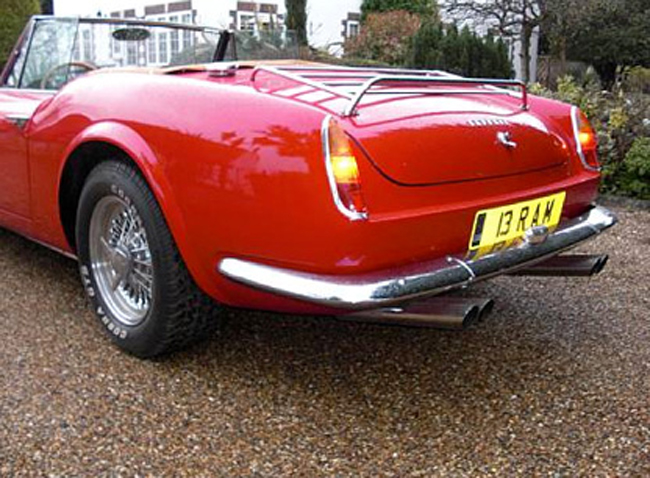 Although relatively sound, time had taken it’s toll. The body was in need of attention and some adjustments required. We could not wait to get stuck in. It was decided that the best way forward was to strip back, reprime and repaint in the original Ferrari red.

The results speak for themselves. The car was sold in April 2010 by Bonhams London for a large, five figure sum – more than double it’s guide price. Click here to see a video of the auction.

Home to the Duke of Devonshire, Chatsworth house once again played host to the regional TVR meet for 2010.

As in previous years much anticipation surrounded the expected and final number in attendance and by lunch time the number had already exceeded six hundred, well on the way to last years total of 676.

Despite a wet start we enjoyed the drive up in to Derbyshire in the Carizma Chimaera which, as it’s first outing of the year, ran superbly.

By mid morning the damp start gave way to sunshine and the tranquillity of the Chatsworth lawn rumbled with the distinctive tone.

It was again fantastic to see so many beautiful examples of the marque on display. Many thanks to the TVR club organisers and the Cavendish family for an excellent outing at a fantastic venue.

Chatsworth house and gardens are open daily all year (except Christmas) for more info visit www.chatsworth.org

Just got back from the annual TVR Club gathering at Chatsworth House in Derbyshire – a great day with an excellent turn out of cars…292 was the final count we hear!

We took the Chimeara and a beautiful Griffith belonging to James Agger which was for sale. The roofs were down all the way and it was a really good drive…abount an hour from where we are. It was nice to end up in convoy with a bunch of other TVRs as we made our way up the M1 and through Chesterfield.

For those of you who didn’t go, there was a really good mix ture of cars ranging from Tasmins and S3’s right up to a handful of Sagaris’. We even saw some cars painted in colours we hadn’t seen on TVRs before.

All in all it was good to see such a large number of TVRs in one place, all parked together. It was also good to meet new people from other clubs who had travelled a lot further than us.

Well done to the organisers and we are both looking forward to next year!

Some of our favourite sites